A Dying Dream was God’s Grace

The Will of God and the Subtle Seduction of Divination 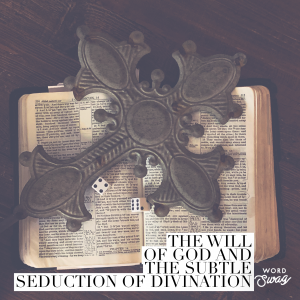 After months of looking, pondering, evaluating, and praying you find yourself staring at your computer screen looking at two different cars. Narrowed down from twenty, it now comes down to a choice. Which car to buy? Have you ever been faced with a big decision like this—a new car, home, job or perhaps a cross country move? All believers strive to do what God wants, but what does God want? That is often not so clear, so how do we know God’s will for our future?

WHAT DOES THE NEW TESTAMENT SAY?
The way we know God’s will is by our interacting with the Spirit with our mind.
“Do not be conformed to this world, but be transformed by the renewal of your mind, that by testing you may discern what is the will of God, what is good and acceptable and perfect” (Romans 12:2).
Knowing the will of God involves mind transformation. That transformation, only occurs by the Holy Spirit, which lives in us and makes us new (1 Corinthians 3:16; 2 Corinthians 5:17).
Through the new birth the Holy Spirit dwells in us. This interaction of mind and Spirit involves prayer. The Spirit therefore prays on our behalf the will of God (Romans 8:27-28).
Since we have the mind of Christ, because the Spirt of God dwells in us, as indicated in 1 Corinthians 2:16, and since faith comes from hearing through the word of Christ, as stated in Romans 10:17, we conclude this with confidence: The way we come to know the will of God is by his Word transforming our thinking by building our faith through the Spirit’s leading in prayer.

WHY THE CONFUSION?
Proverbs 16:33 says, “The lot is cast into the lap, but its every decision is from the Lord.”
In episode 807 of Ask Pastor John, titled “Should We Flip a Coin to Find God’s Will,” Dr. Vern Poythress says this: “Every flip of the coin is under God’s control. There are many passages, I think, that indicate God’s control over all is comprehensive — even the hairs of your head are numbered. If a sparrow falls to the ground, it is not apart from the will of God… (Matthew 10:26–33) moral approval is quite distinct from saying God sovereignly planned it. And when the coin flips, what we know from Scripture teaching is that God sovereignly planned how it would come to. But that gives us no information about his moral will. It is quite different.” Dr. Poythress highlights the difference between God superintending the outcome of a coin flip and God’s desire of his moral will for you and me. They are not the same.

WHAT IS CASTING LOTS?
Today casting lots takes the form of choosing random numbers, flipping a coin, bibliomancy, and other tattered mediums of divining God’s will. When asked, “Does anyone know what casting lots looked like? Was this a two-sided stone?” Dr. Poythress replies, “We don’t know all the details, but it is something like rolling dice. Our modern dice have six sides. And it may have been, as you say, two-sided. We don’t know the details.” Did you catch that? We don’t know what casting lots is. Why would anyone consider major life decisions, like buying a car, purchasing a home, moving, or perhaps taking a new job, based on something that is not clearly defined or understood? Isn’t that guessing?

HOW DO WE DO WHAT WE DON’T KNOW?
Part of the issue is muddled thinking. Because chance is involved and Proverbs 16:33 is true, there is a fail-safe way to always know God’s will, says those in favor of casting lots. But as Dr. Poythress points out this is immature thinking: “And people make a mistake. I know there are immature people out there who think, “I’m not sure what God’s moral will for me is. I will find out by flipping a coin.” That is a misunderstanding of how God reveals his moral will.” It is akin to saying because a Go-Kart and a Ferrari both have engines, transmissions, and wheels they are the same. Obviously, because two things share certain qualities doesn’t mean they are equivalent. Furthermore, if one was to flip a coin or roll two dice, on what authority does one decide the odds? After all, we do not know what casting lots is so how does one begin to set it up? There is no basis to know what odds God desires us to use. It then goes without saying that when you choose the odds arbitrarily, it poisons the well before lots are cast. But it gets worse as we think this through.

THOUGHT EXPERIMENT
If casting lots is supposed to be normative practice, then should we consider casting lots to see if God desires us to cast lots? Casting lots does not have special privilege excluding itself from the reality of what God wants. After all, God might not want us to cast lots in certain choices, but how to know? Moreover, an infinite regress would seem to ensue. For every time the lot was cast, yet another lot could be cast to see if that lot should have been cast. Stopping this regress would be on your terms, just on a whim.

WHAT WILL YOU DECIDE?
It is clear no one can ever know they are casting lots in the biblical sense. Rather, all that can be said is that they are self-constructing a way to divine the will of God. In other situations, outside the church, those devices mediating between random outcomes are known as gambling; no Christ glorifying believer would willingly gamble on knowing the will of God. Doing so would be a thoughtless endeavor which places mindless stones in between mindful people, created by an all-knowing God. Don’t turn God into a mechanistic magical Genie. Turn yourself over to the glorious all-encompassing king.
There is but one mediator between us and God: Jesus Christ (1 Timothy 2:5). One can know that, no betting required, and well, that is saying a lot.